Teamwork leads to PhD and MSc in mathematics 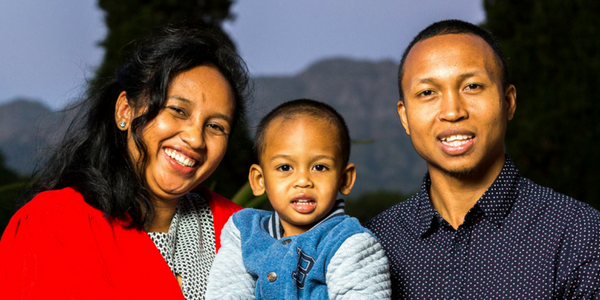 Academic perseverance and teamwork at home paved the way for a couple originally from Madagascar, to both completing postgraduate degrees in mathematics from Stellenbosch University (SU) in 2017.

Dr Valisoa Razanajatovo Misanantenaina received her PhD in mathematics at the December 2017 graduation ceremony for her research on graph polynomials and related parameters. Her husband, Tsinjo, earned his MSc in mathematics in March 2017, also at SU.

The couple met in 2011 while studying at the University of Antananarivo, but at the end of 2012 their relationship was put to the test when Valisoa was selected to participate in the African Institute for Mathematical Sciences (AIMS) programme in South Africa. AIMS is a pan-African network of centres of excellence for postgraduate education, research and outreach in mathematical sciences.

Valisoa says although long-distance relationships are hard, they decided not to give up on each other: “Tsinjo encouraged and supported me all the way. He even interrupted his studies for one year to work at a high school to earn money for our wedding.”

With the prospect of finally being together at the same place at the same time, the couple decided to get married before coming to Stellenbosch in January 2015. But one plus one quickly became three.

Valisoa says she was really scared when she learned that she was pregnant, but again the couple managed to turn the situation around through teamwork: “Luckily I could mostly do my research from home during the first six months of my son’s life”one of the advantages of doing research in mathematics! When he was six months old we started taking turns to look after him. I used to come into the office in the mornings while my husband took care of him. In the afternoon he would then come into the office and work until late.”

Looking back now, she says it was a wonderful experience: “My colleagues and staff members of the mathematics division were extraordinary. I sometimes just had to come to the office with my son and was scared that he will disturb them, but they even gave advice and helped to make it work for me.”

Next year Valisoa will continue as a postdoctoral fellow with Prof Wagner who was her study leader for her PhD as well. She hopes to find an academic position afterwards until Tsinjo completes his PhD. Then they will have to decide on the future of their family.

She says AIMS and SU allowed her to develop on an academic and personal level. She concludes: “Always remember that difficult roads often lead to beautiful destinations.”